Last week, we covered Material Maker, a promising procedural texture-generation tool that many artists hope will become a viable alternative to Adobe’s Substance Designer. But is there an open-source alternative to its sister application, Substance Painter?

One possibility suggested in the comments section of the original story is ArmorPaint: a new 3D painting package being developed by the team behind the Armory game engine. It offers a familiar base workflow, an interesting range of more advanced features, and is free to compile from source.

The software has been in development since last year, but since the team has just released the first developer builds for ArmorPaint 0.7, now seems a good time to check it out.

An open-source alternative to Substance Painter?

Like Substance Painter, ArmorPaint enables artists to texture models by painting directly on their surface. You can see the workflow in the video above, which was recorded using the stable 0.6 builds.

You can import 3D assets in OBJ, FBX and – as of the 0.7 update – STL format, or as Blender scene files. Texture maps can be imported in a range of standard 2D formats, including PSD and HDR.

The software includes its own node-based material editor, making it possible to create base materials for the model directly within ArmorPaint, or alternatively, you can import existing sets of PBR texture maps, which ArmorPaint will then automatically assemble into a material.

You can then paint material properties onto the model using a set of Substance Painter-like tools, including a basic paintbrush; an eraser; fill, clone and blur tools; plus an experimental particle brush.

Both the 3D view and a 2D view showing the UV layout update in real-time: the software is GPU-based, and is described as offering “seamless” 16K texture painting on a “high-end graphics card”.

Completed texture maps can be exported as 8-bit JPEG or PNG files or 16-bit/32-bit EXRs. You can also bake geometry-based texture maps, including AO, Cavity, Curvature and World Space Normal. 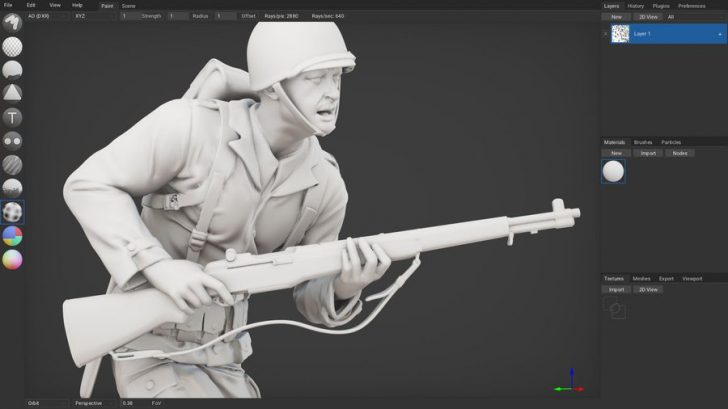 To that, the latest 0.7 developer builds to add a range of new features, from standard workflow must-haves like an auto-save system and support for blending modes when working with layers and brushes, to more advanced features, including the groundwork for a new plugins system.

It’s intended as a way for users to modify the functionality of existing nodes, or add entirely new node types: as a proof of concept, the devs have implemented recent Blender Development Fund backers Embark Studios’ texture synthesis system as an ArmorPaint plugin.

The source code for ArmorPaint is available under a zlib license, so you can compile it yourself for free. There are instructions for how to do so on GitHub, and Jayanam has recorded a video tutorial on how to compile the software on Windows 10.

Readymade compiled binaries are available via Gumroad, and cost €16 (around $18). Once you’ve bought the software, all further updates are free. There are official builds for Windows and Linux, plus an experimental unsigned macOS build.

At the time of posting, ArmorPaint 0.7 is still an experimental developer version, but if it follows the same pattern as 0.6, the new features should reach a stable build within six months.