a low-polygon babirusa for animation .
The babirusas are a genus, Babyrousa, in the pig family (Suidae) found in Wallacea, or specifically the Indonesian islands of Sulawesi, Togian, Sula and Buru.[1] All members of this genus were considered part of a single species until 2002, the babirusa, B. babyrussa, but following the split into several species, this scientific name is restricted to the Buru babirusa from Buru and Sula, whereas the best-known species, the north Sulawesi babirusa, is named B. celebensis.[2] The name "pig-deer" has sometimes also been used in English, and is a direct translation of the Indonesian babi-rusa.

The babirusa is also called a wild pig with a dental problem. They have remarkable tusks or canine teeth that can grow right up through the skin in their snout and curve back toward their forehead. The word babirusa means “pig deer” in the Malay language. It is one of the most unusual-looking mammals in the zoo.

There are four different types of babirusas. Most famous babirusa is North Sulawesi babirusa. This is famous for its interesting upper tusks, which only the males possess, but both sexes have lower tusks. Like many pigs, the male babirusa’s canine teeth will continue to grow throughout its entire life.

Babirusas are wild members of the pig family, but they differ from other pigs in several ways. Their snouts are not as specialized as those of other pigs. They have rough, wrinkled skin that is brown or dark gray in color with scattered, spiny yellowish hairs. Unlike a common pig, however, they have fairly long, thin legs.

The Babirusa is omnivorous, but it most often will eat fruits and nuts, eating insects and their larvae as the primary source of meat. They appear to be very fond of mangoes but will settle for mushrooms and leaves. Because of the placement of their tusks, they don’t root under the dirt for their food like other pigs.

Thank you for showing interest in buying 3D model and choosing FlatPyramid as your first option for 3D models. We are happy to serve you and hope they will be useful to you. If you have any questions the object then feel free to contact us at (310) 697-3740. 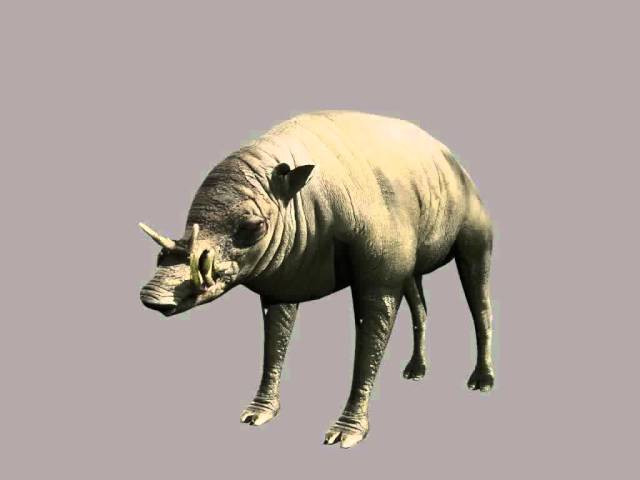