Cartoon T-Rex 3D model, fully rigged and finely skinned in max version.
In max version, the scene is exactly the same than me presentation picture with mountains and grass.
No Special render engine needed, just unzip and render. The model is very easy to anime and perfect for games.

Available in the following formats: Max 8, 3ds, Obj, Fbx, Lwo
Textures and materials are included into each archive.

Tyrannosaurus is a monotypic genus of carnivorous dinosaurs from the coelurosaurs group of the Theropod suborder, including the only valid species - Tyrannosaurus rex (Latin rex - “king”). It lived in the western part of North America, which at that time was the island of Laramidia, and was the most common of tyrannosaurids. The fossil remains of tyrannosaurs are found in various geological formations dating from the Maastricht century of the Cretaceous, about 67-65.5 million years ago. It was one of the last lizard-dinosaurs that existed before the cataclysm, which put an end to the era of dinosaurs (Cretaceous-Paleogene extinction).

Like other members of its family, the Tyrannosaurus was a two-legged predator with a massive skull, which was balanced by a long, heavy and stiff tail. Compared to the large and powerful hind limbs of this pangolin, its front legs were quite small, but unusually powerful for its size, and had two clawed toes. It is the largest species of its family, one of the largest representatives of theropods and one of the largest land predators in the entire history of the Earth. The largest of the known complete skeletons of this dinosaur has a length of 12.3 meters, height to the thigh is 4 meters, and the mass of this individual, according to experts, reached about 9.5 tons in life. As the largest carnivore in its ecosystem, the Tyrannosaurus was probably a super-predator and hunted hadrosaurs, ceratops, and perhaps even sauropods, although some researchers suggest that it ate mostly carrion. Moreover, the dispute about whether a tyrannosaur was a full-fledged hunter and predator or scavenger, was one of the most intense and protracted in the history of paleontology. Now, most experts believe that Tyrannosaurus was an opportunist predator - could both hunt and eat carrion.

T-Rex’s Adventures is an animated TV series that was distributed in North America in syndication from 1992 to 1993.

The show includes five Tyrannosaurus musical brothers who played as a vaudeville group for the Dragon company owned by the beautiful and wealthy Myrna to sold-out crowds while also secretly fighting crime as ‘T-REX,’ masterminded by Professor Edison.

The brothers Bernie (blue), Bruno (pink), Bubba (green), Buck (yellow) and Bugsy (purple) were born in a world of anthropomorphic dinosaurs. The unique power of each brother was linked to a particular part of their anatomy; the legs of Bernie, the arms of Bruno, the tail of Bubba, the mouth and teeth of Buck, and the telekinetic eyes of Bugsy.

One of the notable elements of the show was to send celebrity voices to the T-Rexes imitation: Jack Benny, Art Carney, Bing Crosby, Humphrey Bogart, and Jimmy Durante. The show an American / Japanese co-production between C&D (Créativité et Développement), Gunther-Wahl Productions and Kitty Film, a well-known anime maker, lasted only one season.

FlatPyramid created a 3D model of Cartoon T-Rex with a detailed interior that is completely textured to redefine its performance and captivating layout. This design shows realistic texture & graphics in high definition to be used in animations, movies, sports, and education. We have created a model as real as we could.

You can visit our website if you are looking for such a model. Hopefully, you’ve found your piece here and we also appreciate your strong trust in us in the selection of 3D models. 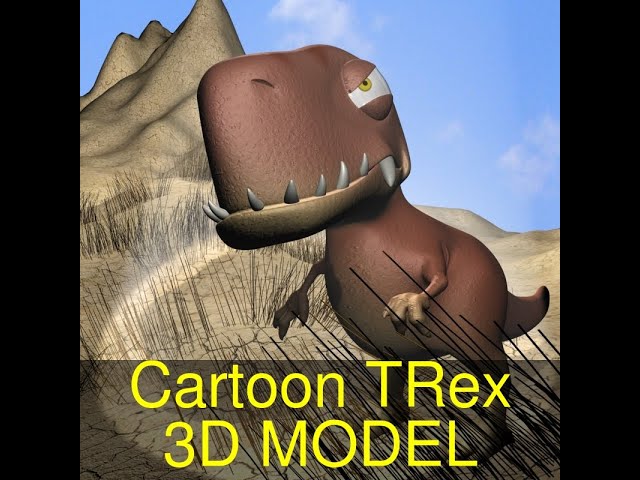