Detailed model of telescope
All elements are movable for making animation and all objects are tidy in separate layers.
Rendered with C4D.
Polygonal
Polygons 27331
Vertices 30573

A telescope is an optical instrument that makes distant object magnified. The first known practical telescopes were refracting telescopes invented in the Netherlands at the beginning of the 17th century, by making use of glass lenses.

The reflector, which uses mirrors to gather and focus light, was invented within a couple of decades of the primary optical telescope., many new types of telescopes were made in the 20th century; including radio telescopes in the 1930s and infrared telescope in the 1960s.

The word telescope now refers to a broad range of instruments that are capable of detecting different regions of the electromagnetic field, and in some cases other sorts of detectors.

The 3D model you see in the image is of a radio telescope. Radio telescopes are directional radio antennas that typically employ an outsized dish to gather radio waves. The dishes are sometimes made of a conductive wire net that have openings smaller than the wavelength being observed.

An optical telescope produces a magnified image of the area of sky that is being observed, whereas a traditional radio telescope dish contains a single receiver and records a single time-verifying signal feature of the observed region; this signal could also be sampled at a range of frequencies.

Our 3D model of a telescope is very detailed and of high-resolution. It is available in different formats for commercial, non-commercial and editorial purposes. We hope you like it.

For further inquiry, please be happy to contact us.

Thanks for showing interest in the 3D model of a Telescope at FlatPyramid. 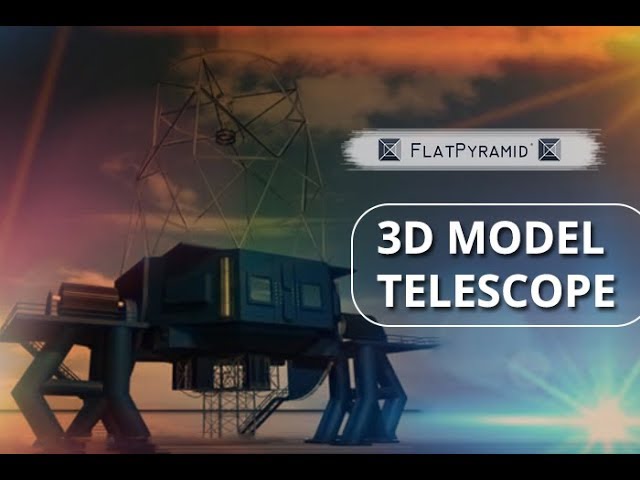