The undercarriage was one of the characteristic features of Churchill, on which the track, for better maneuverability, was made covering the entire hull, whose width was now equal to the full width of the tank, which significantly increased the internal space. On each side, the undercarriage consisted of eleven dual support rollers with a diameter of 254 mm, a drive wheel, and a sloth - a wide-body forced the use of rollers of small diameter. Suspension rollers - individual, spring. The axis of each roller was mounted on a balancer, with one end hinged to the bracket on the tank hull, and the other resting on the spring attached to the bracket. The first and last rollers of each side were raised from the ground and worked only when the tank overcame obstacles, and the 2nd, 9th and 10th track rollers had a shortened suspension travel and worked mainly when the tank was moving on soft ground. There were no supporting rollers, instead, the upper branch of the caterpillar slid along special guides.

Already in the early stages of familiarization with the tank, a number of design and manufacturing defects were discovered. The defeat of the PQ-17 convoy had a strong influence on the formation of the units into which the British heavy infantry tanks were supposed to go. Until the end of September 1942, Churchill was concentrated in the 194th Training Tank Brigade. It was formed in April 1942 to train British crews. In addition to the Churchilli crews, the crews of Valentine and Matilda prepared here. Later, all who arrived at the Gorky Automobile-Armored Center "Churchill" also first passed through the 194th tank brigade. In addition to training the crews, malfunctions were also detected here.

The formation of new units began in October 1942. All British tanks of this type fell into separate Guards tank regiments, which were formed according to staff No. 010/267. According to the staff list, each regiment consisted of 21 tanks and 3 armored vehicles. The first on October 8, 1942, formed the 47th, 48th, 49th and 50th separate Guards tank regiments. 50th Guards. TP originally was armed exclusively with Churchill II (out of 20 Churchill II supplied, 19 were sent to the 50th Guards Heavy Tank Regiment; another tank was in the 194th Tank Training Brigade), but later it was equipped with two Churchill III. In general, statistics on the number of tanks that had various defects looked far from rosy. In the 47th Guards Tank Regiment, certain faults were found on 12 tanks, in the 48th Guards. tp at 16, in the 49th Guards. TP 15 and 50 Guards. TP - to 8. It is not surprising that the sending to the front was delayed.

During operation, it was found that the tanks were stalling on the icy hillsides since their tracks did not provide a sufficiently reliable grip. As a result, small metal spikes were riveted on the tracks, which made it possible to improve the tank maneuverability.

The 48th Guards Tank Regiment was the first to be recognized as combat-ready. December 31, 1942, he entered the disposal of the commander of the Don Front.

48th Guards. TP was not the only Churchill regiment that fought at Stalingrad. Nearby acted 47th Guards. tp, which since January 9 was used as part of the 65th Army. He acted jointly with the 91st Tank Brigade, 33rd Rifle, and 67th Guards Rifle Divisions. By the end of January, the regiment was fighting in the area of ​​the Barricades factory, while only 3 of its vehicles remained fully operational. As in the case of the 48th Guards. tp, most of his cars were not lost forever but required repairs.

The next unit on the Churchill, which entered the battle, was the 50th Guards Tank Regiment. On March 8, he made a march to the railway station in Gorky, and on the 16th, a train with materiel of 50 Guards. tp arrived at the station Voybokalo Leningrad region. The tanks went on the first attack on March 19th.

Features:
- Inside scene: -model without textures
- No cleaning up necessary, just drop your models into the scene and start rendering.
- No special plugin needed to open scene.

The Infantry, Mk IV Churchill Tank was a British heavy infantry tank, mainly known for its heavy armour in the Second World War. Its large longitudinal chassis as well as the ability to climb steep slopes makes it one of the heaviest Allied tanks of the WW2. Churchill MK IV Tanks were used by British and other Commonwealth countries from time to time. In addition, 344 copies of Mark IV Churchill Tanks were exported to the Soviet Union forces on the eastern front during the Second World War.

Secondary armament: two 7.92mm Besa machine guns
Engine: Bedford horizontally opposed twin-six petrol engine 350 hp (261 kW) at 2,200 rpm
Front armor : 152 mm
Rear armor: 35 mm
The biggest production of this series in Mark IV Churchill Tank was with 1622 tanks. It gives cheaper and less labor-intensive cast turret. The early production of models had a counterweight to balance their 6 pdr gun, and many were re trofitted with the new long barrel 6 pdr (57 mm/2.24 in) Mk.V gun.
At FlatPyramid we have very high definition 3D model of Churchill Mark IV Tank which is created accurately, in real units of measurement, qualitatively and maximally close to the original. It is available to download for commercial, non-commercial, and editorial use. Thank you for choosing FlatPyramid as your first option for 3D models. 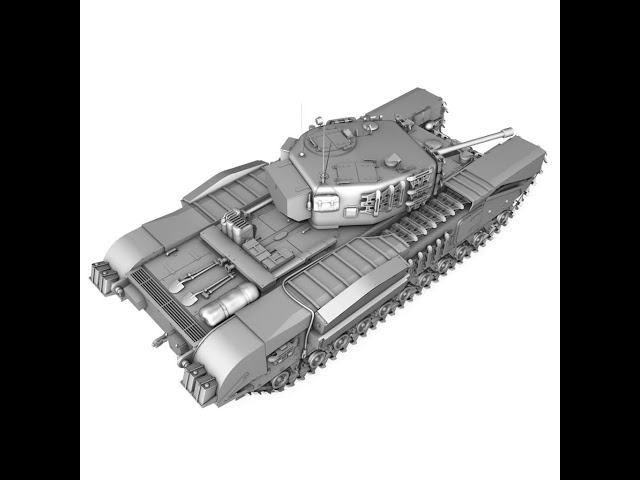