The T-72 is a main battle tank of Soviet origin. It was developed in the early 1970’s to replace the earlier T-55 and T-62 as the main battle tank in Soviet service. The T-72 is a further development of the T-62 that uses many of the technology designed for the contemporary T-64 alongside which it was to serve. The introduction of the T-72 provided the USSR with such a boost in capabilities that it spurred the development of newer NATO tanks such as the M1 Abrams, Leopard 2 and Challenger 1. The Russian T-90 tank currently in production is a further development of the T-72.

The T-72 is a medium sized tank with a layout similar to other modern Soviet tanks. The driver is seated in the middle of the hull, just in front of the turret. The turret houses the commander and gunner and since the 125mm cannon is connected to an autoloader no additional crew is needed to load the gun. The diesel engine and drivetrain are located in the rear. A large number of variants was produced which subsequently improved the performance of the design. For export less capable and cheaper versions were produced.

The main user of the T-72 was the USSR. Unlike the T-64 and T-80 the T-72 was exported in large quantities, although most export versions have reduced capabilities. Even though the production has switched to the T-90 the T-72 remains one of the most common tanks in the world. Besides Russia they are commonly found in Eastern Europe, the Middle East, Asia and Africa.

FlatPyramid, we have developed a high-resolution 3-D model of T72 MBT. It is available in 3ds, max formats for commercial, non-commercial and editing purposes.These models are used in difficult architectural visualizations, animations, movies or games. 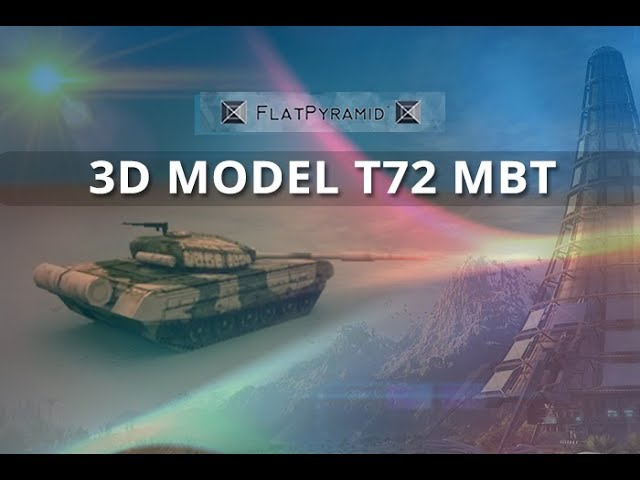