The M3 Stuart, formally Light Tank M3 was an American light tank of World War II. It was used by British and Commonwealth forces prior to the entry of the USA into the war, and thereafter by US and Allied forces until the end of the war.

The M3 light tank was an American light tank of World War II. An improved version entered the service as M5. It was supplied to the British and other Commonwealth forces under lend-lease prior to the entry of the U.S into the war. Thereafter, it was used by U.S and allied forces until the end of war.

As the events in the Europe disclosed, American tank designers realized that the Light Tank M2 was becoming obsolete and set about improving it. The upgraded design, with thicker armour, modified suspension and new gun recoil system was called “Light Tank M3.”

Production of the vehicle started in March 1941 and continued until October 1943. Like its direct predecessor, the M2A4, the M3 was initially armed with a 37 mm M5 gun and five machine guns.

The M3 and M3A1 variants were powered by an air-cooled radial engine, either a gasoline fueled 7-cylinder Continental W670 or a 9-cylinder Guiberson T-1020 diesel. Both of these power plants were originally developed as aircraft engines. Internally, the radial engine was at the rear and the transmission at the front of tank’s hull.

At FlatPyramid, we have developed a 3D model of the M3 Light Tank. It is a very high definition model which can be used for commercial, non-commercial and editorial purposes. It is available in different formats to be used for different purposes. We hope that you like it.

For further assistance, please feel free to contact us.

Thank you for showing interest in the 3D model of the M3 Light Tank. 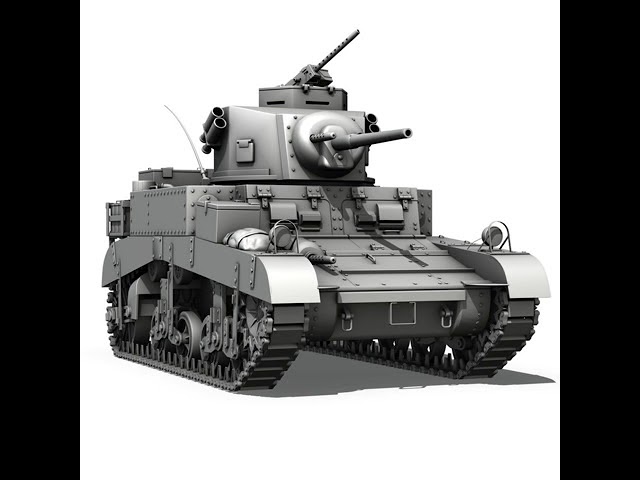