Features:
- Inside scene: - model
- No cleaning up necessary, just drop your models into the scene and start rendering.
- No special plugin needed to open scene.

The 2cm Flak 38 was a German anti-aircraft gun used in World War II. Originally produced for the Kriegsmarine in 1938, it was accepted by the Luftwaffe and ground forces in 1940 and remained in production until 1945.

Antiaircraft defense became very important with the advent of powerful air forces in WW2. Germany employed a number of antiaircraft platforms, with low-level air defense being taken care of by weapons such as the FlaK 30 and FlaK 38. The FlaK 38 (Flugabwehrkanone 38) was a 2cm anti-aircraft gun used by various German forces throughout WW2. It was produced in a variety of models, notably the Flakvierling 38 which combined four FlaK 38 autocannons onto a single carriage. The Flakvierling 38 consisted of quad-mounted 2cm FlaK 38 AA guns with collapsing seats, folding handles, and ammunition racks. The mount had a triangular base with a jack at each leg for leveling the gun. The tracker traversed and elevated the mount manually using two hand-wheels.

The gun was fired by a set of two pedals effective vertical range of 2,200 meters, each of which fired two diametrically opposite barrels in either semi-automatic or fully automatic mode. The chief advantage of the 2cm FlaK 38 was its significantly higher rate of fire; its cadence of 220 rounds per minute compared well to the much slower 120 of the FlaK 30. Produced by Rheinmetall, the FlaK 38 was towed on a light two-wheel carriage known as the Sd.Ah.51. For firing the gun platform could be quickly lowered onto the ground.

At FlatPyramid, we have a high polygon 3D model of 2cm Flak 38 with SD.AH. 51 in various file formats like 3ds /.FBX/.OBJ/.C4D/lwo/ with high resolution and accurate dimensions maximally close to the original. No Special plugin needed to open scene.

Thank you for showing interest in buying 3D model from FlatPyramid which are also available to download for commercial, non-commercial, and editorial use. Visit again, because we love to serve you. 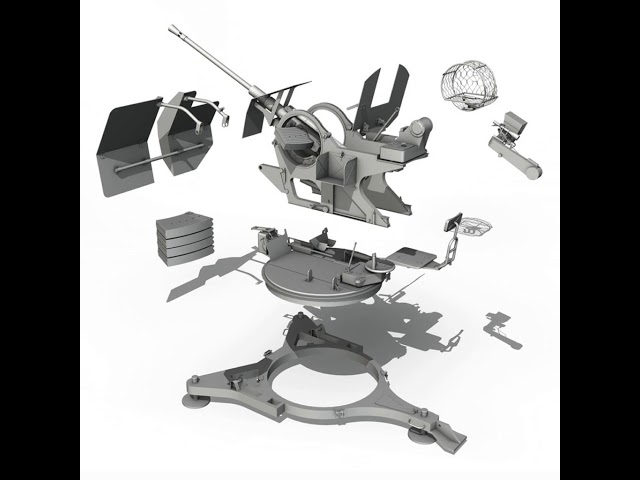