The A350 is the first Airbus aircraft in which the fuselage and the wing are mainly made of carbon fiber. It can carry from 250 to 350 passengers in a typical three-class configuration, with a maximum capacity of 440-550 passengers, depending on the modification. The starting customer for the A350 is Qatar Airways, which has ordered 80 aircraft (all three options). The prototype A350 made its first flight on June 14, 2013 in Toulouse-Blagnac, France. The first type certificate was issued on September 30, 2014 by the European Aviation Safety Agency for the A350-900 version with Rolls-Royce Trent XWB engines]. By April 2014, Airbus received orders for 812 aircraft from 39 different customers around the world.

January 15, 2015. The A350 XWB, owned by Qatar Airways, set off on its first commercial flight - from Doha to Frankfurt - with passengers on board.

The initial version was conceived in 2004 with the fuselage based on the A330 and the same layout with it, but with a significantly updated design. The airline did not satisfy this option, and in the future, at the request of potential customers, this idea was abandoned. Airbus has allocated 4 billion euros to develop a new model, called the A350. New wings, engines and tail stabilizers in combination with new composite materials and fuselage production methods made the A350 almost completely new aircraft.

In 2006, Airbus redesigned the project and renamed it the A350 XWB. Airbus said that the aircraft will be more economical, and its operating costs will be 8% lower than the Boeing 787 Dreamliner

Airbus A350-900 3D model was created in blender3d 2.71. Rendering images with blender internal render with standard lights and materials. There are 2 textures, one for fuselage with windows and tail decals, second is for wing details. Model uv mapped from side view( fuselage), and from the top view (wings). The cockpit was created from polygons. There are no elevators, no interior objects and no landing gears for this product. Enjoy my product. 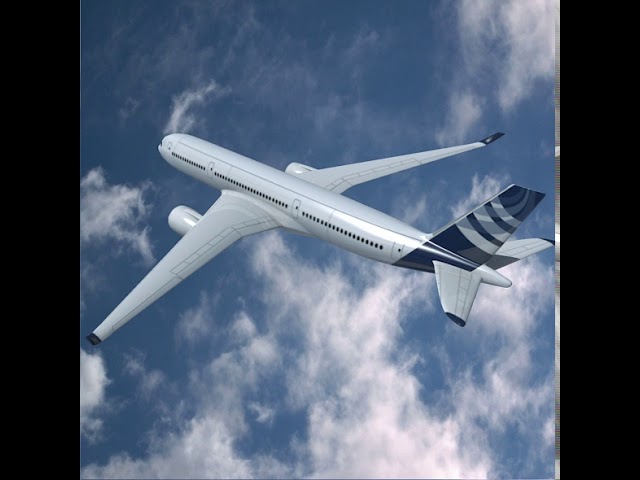