The Heinkel He 177 Greif 3D model was the only long-range operational bomber used by the Luftwaffe during World War II. Beginning its existence just before the war started as the first heavy bomber of Germany designed specifically for that task, was also charged wrongly since its inception for accurate dive bombing in which the Junkers Ju 87 had pioneered during the Civil War Spanish. This requirement for a dive-bombing capability in such a large aircraft resulted in a design with a drag that was significantly lower than any other four-engine heavy bomber of the time to carry out the task, leading to many of the main deficiencies exposed in its general design and that hindered its widespread adoption as a strategic bombardment. The crew nicknamed it Luftwaffenfeuerzeug (" Luftwaffe lighter ") or "flaming coffin" because of the serious engine problems that the first versions of the plane had. 2 Later, when those problems were rectified the model was a success, but it could not be deployed en masse due to the worsening of the German situation in the war.

Features:
- Inside scene: -model - 20 textures - 1 material- 1 alphamap
- All materials, bodypaint-textures and textures are included.
- No cleaning up necessary, just drop your models into the scene and start rendering.
- No special plugin needed to open scene.

- In lwo,3ds,fbx, c4d and obj are parts for an seperate fly and a ground version.

Heinkel He 177 “Greif” (German: Heinkel He 177 Greif; German. Griffin) is a German heavy bomber. Established in the Heinkel design bureau under the direction of G. Gertel and Z. Gunther.

The first flight took place on November 19, 1939. Adopted by the Luftwaffe in December 1942, where he had the nickname "flying fireworks".

The plane was supposed to deliver 1,000 kg of bombs over a distance of 6,600 km. It was assumed that the speed of the aircraft will be 545 km / h. Provided for the possibility of dropping bombs from a dive.

In November 1937, the project was given the designation No 177 “Greif” (“neck” or “griffin”, the name comes from the griffin on the coat of arms of the city of Rostock, where Heinkel was located).

Twin-engine all-metal monoplane. One of the main features of the aircraft was the use of twin power plants DB606 / 610, which are located side by side engines DB601 / 605, respectively, working on a common shaft. The idea, therefore, was to create a powerplant 2700-2950l. with. and get by with just two engine nacelles on such a large plane. However, the same power plants have become an inexhaustible source of a variety of troubles, breakdowns and accidents, accompanied by fires. The exhaust manifolds in tightly assembled units were next to each other and close to the fuel lines. Only by 1944 was it possible to achieve a relatively stable trouble-free operation of the engines.

Another feature of the aircraft was the chassis. In order not to increase the size of the engine nacelle, the designers made the main racks of two parts, which were retracted into the wing, in different directions.

The aircraft carried a variety of defensive armaments in remote-controlled installations (for the first time on German aircraft), tail installation and the ventral gondola (like other German structures). 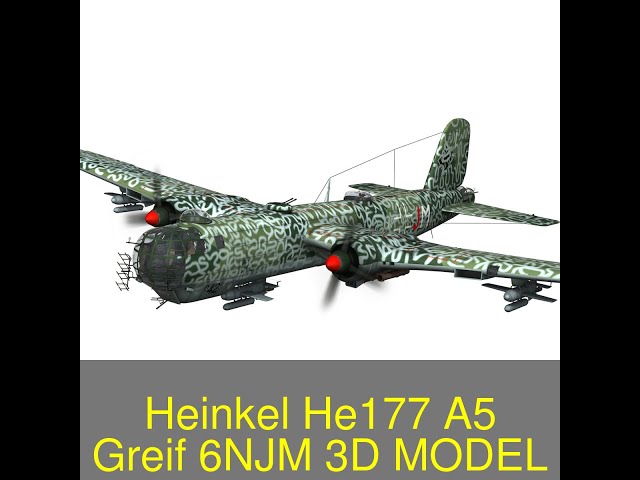