The He 177 3D model was conceived as a result of a requirement of the Reichsluftfahrtministerium (RLM), with the name Bomber that specified a bomber more advanced than the Dornier Do 19 or Junkers Ju 89, capable of carrying a load of bombs of at least 1,000 kg ( 2,204 Lb) in a range of 6,695 kilometers (4,160 miles). The aircraft had to have a maximum speed of about 540 km / h (335 mph) in height and possess sufficient structural strength to carry out dive attacks in its medium grade (later changed to 60 degrees). In fact, it was a development of the previous Heinkel project, the long-range bomber P.1041.

In order to meet these specifications, the Heinkel He 177 possessed many advanced features including the engines, along with the evaporation and cooling surface as well as remote-controlled weapons. An unusual feature of the aircraft was the use of two engines in each gondola that moved a single propeller. Siegfried Günther, head of Heinkel design, opted to use the Daimler-Benz DB 606 configuration, which consisted of two Daimler-Benz DB 601 engines coupled to a common propeller, in order to minimize aerodynamic drag. The two engines are coupled side by side in each gondola and tilted almost vertically, using a single gear housing that connected the two crankcases, and two pinions and the transmission on a single crankshaft. The insistence of this engine configuration derives directly from the RLM's commitment that the He 177 should be capable of being used to dive bomb. The use of only two propellers in a heavy bomber also offered a significant reduction in drag and a marked improvement in maneuverability.

Features:
- Inside scene: -model - 18 textures - 1 material- 1 alphamap
- All materials, bodypaint-textures and textures are included.
- No cleaning up necessary, just drop your models into the scene and start rendering.
- No special plugin needed to open scene.

- In lwo,3ds,fbx, c4d and obj are parts for an seperate fly and a ground version. 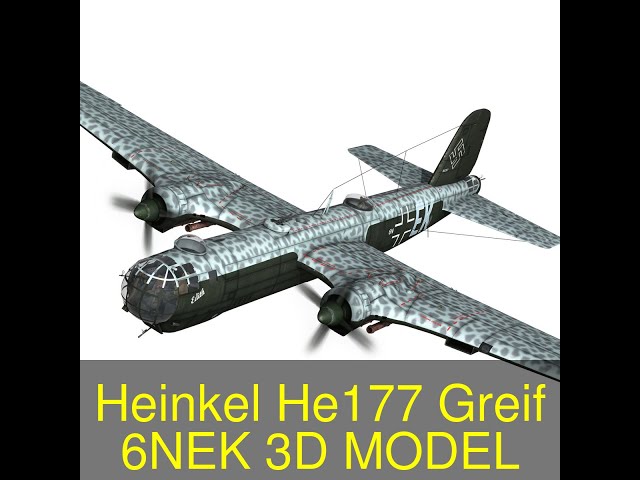