A characteristic feature of the Churchill tanks was the undercarriage of unusual design. The caterpillar was enlarged so that it covered the hull side niches, increasing the size of the internal volume. On each side of the hull, there were 11 dual-track rollers with individual spring suspension. In front of the hull there were guide wheels, in the stern - leading wheels. Supporting rollers were absent because instead of the special guides were used on the upper part of the side niches.

To observe the battlefield, Churchill was equipped with the Vickers Mk IV periscope viewing instruments, which provided all-round visibility. Two of them had a driver, another one - the gunner from the exchange machine gun/howitzer. These three periscopes were located in the frontal part of the sheet. Four more were located in the roof of the tower, one with a periscope had a gunner and a loader, and two more were in the commander’s tower. The driver also had at his disposal around inspection hatch in the upper frontal armor plate, closed with an armored cover.

The Churchill transmission also remained unchanged during the production of the tank. It consisted of:

Features:
- Inside scene: -model - 13 textures - 1 bumpmap
- All materials, bodypaint-textures and textures are included.
- No cleaning up necessary, just drop your models into the scene and start rendering.
- No special plugin needed to open scene.

- NOTE - In lwo, obj, 3ds and fbx the Bumpmap Turret_B must manually load in the Materialcanal. (Strength 35-40) 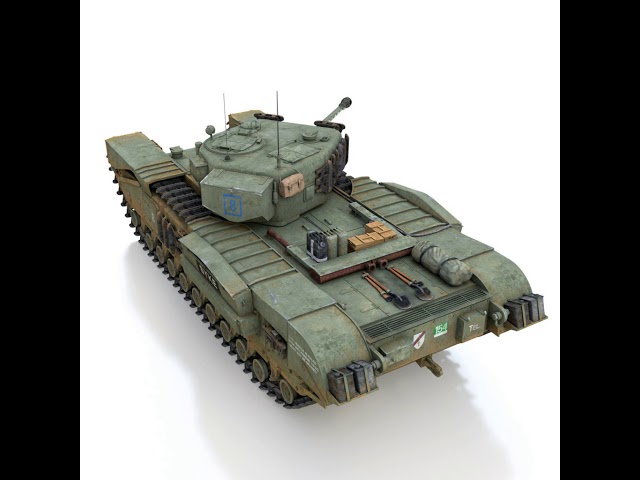