Roys Hot Rods jumps on the Rat Rod craze with this great looking coupe. From its 3 dueces carbs, to its mexican blanket covered seat. This is one sweet nostalgia style rod. Free textures.

In the modern time, rat rods are defined as deliberately worn-down, unfinished appearance, typically lacking paint, showing rust and made from cheap iron cast-off parts. These parts can include parts that have nothing to do with automobiles, like rifles as gear shifters, wrenches as door handles and old saws as sun visors.

The rat rods imitate early hotrods of 1940s, 1950s and early 1960s. They were counter reaction to the high-priced hotrods, many of which were rarely driven and served only decorative purposes. A typical rat rod is a late 1920s through a late 1950s coupe or roadster. The bodies are frequently channeled over the frame and sectioned, or the roofs were chopped for a lower profile.

Frames from older cars or light trucks are sometimes preferred for rat rod conversions due to the chassis that is used for these types of vehicles. Older cars in poor condition are often advertised as candidates for rat rods. Sometimes someone would purchase a small pick-up chassis and insert it into an older car body. This was done in order to create a vehicle that had classic rat rod look, while also maintaining the reliability of a modern vehicle.

Rat rods have been very popular with people with a craze for collecting classic cars. FlatPyramid has developed a 3-D model of Rat Rod Coupe. This is a high definition model meant to use in visualizations, animations etc. We hope that you like it.

Thanks for showing interest in the 3-D model of Rat Rod Coupe. 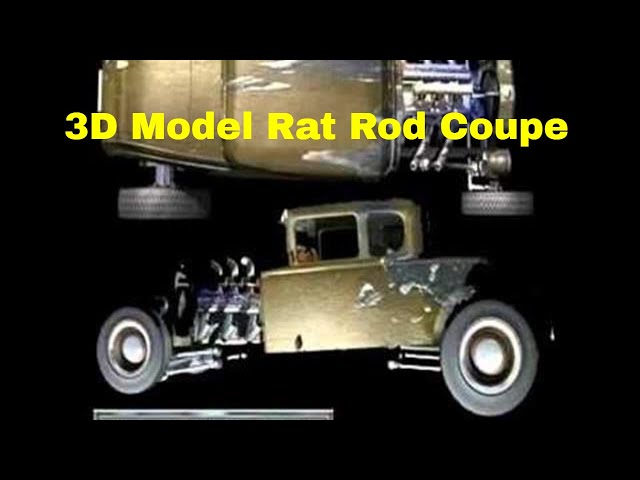