The Volkswagen Beetle was manufactured and marketed by German automaker Volkswagen from 1938 until 2003.

The need for people’s car, its concept and its practical objectives were devised by the leader of Nazi Germany, Adolf Hitler, who wanted a cheap, simple car to be mass-produced for his country’s new road network.

The beetle was designed in 1930s due to the World War II; still it took it almost 10 years to be produced in large numbers for civilians. The car became widely popular in its home country as the Kafer and was later marketed under this nameplate in Germany.

The original 25 hp Beetle was designed for a top speed of around 62 mile per hour, which could be the practical cruising speed on the Reichsautobahn system. As autobahn speed improved in the postwar years, its output was enhanced to 36, then 40 hp, the arrangement that lasted through 1966 and became the “classic” Volkswagen motor.

The split window version of the Beetle was also known as “pretzel”, “split”, or “splitty” among the enthusiasts. It was commonly used to describe transporters of the era.

At FlatPyramid, we have developed a 3D model of the VW Beetle Split Window. It is very realistic and highly defined. It is available in different formats to be used for different purposes. The model can be used in any project either commercial or non-commercial. It is the most detailed model of the VW Beetle Split Window you can probably find on the web.

For further enquiries, please feel free to contact us.

Thank you for showing interest in the 3D model of the VW Beetle Split Window. 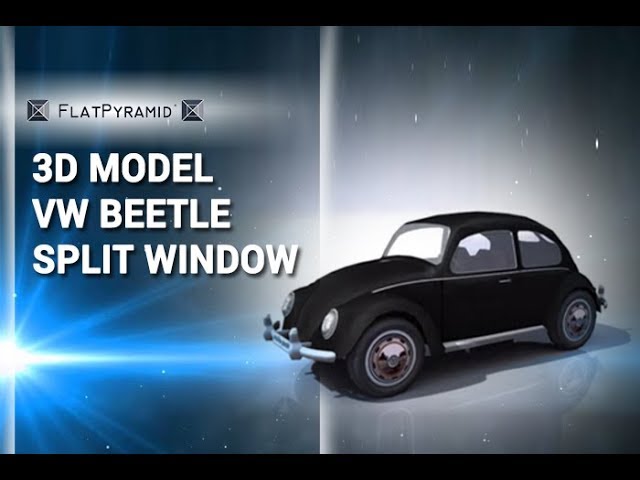