High detailed model with full exterior and fully textured.
The model is lowpoly with mesh smooth modifier so you
can smoothly,escene ready incliyed Materials Vray and
image HDRI.

The Alfa Romeo GT is a coupe automobile that was produced by the Italian automaker Alfa Romeo between 2003 and 2010.

The GT was introduced in March 2003 at the Geneva Motor Show and it came for sale in the Italian markets January 2004. It was built at the Pomigliano Plant, alongside the 147 and 159. A total of 80,832 units were produced.

The GT was based on Alfa Romeo 147 platform with styling by Bertone.

The Bodywork is a classic coupe style, but uses a hatchback two door style compared to the earlier coupes like GTV and some rivals such as the BMW 3 Series Coupe. Combined with a full rear bench giving five seats the GT was advertised as being a practical sports car. Most mechanicals were taken directly from the 156/147 using the same double wishbone front suspension and MacPherson rear setup.

In 2008, Alfa introduced the cloverleaf model as a limited edition complete with new trim levels, lowered suspensions, body kit, 18 inch alloy wheels and was only available in the colours Black, Alpha Red or Blue. The engines included 1.8 L and 2.0 L petrol, as well as 1.9L Multijet turbo diesel. Production ended on 16 June 2010.

At FlatPyramid, we have created a 3-D model of the Alfa Romeo GT 2004. It is available in 3ds, max, fbx, obj; high detailed model with full exterior and fully textured. It is available for commercial, non-commercial and editing purposes. In case of any queries, feel free to contact. 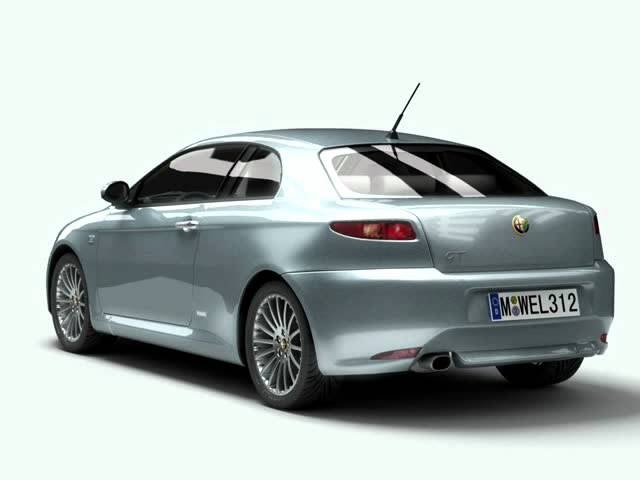