Polygonal model very detailed realized in 3dsmax 9Use of meshsmoth set to 2, the model is separated in groups of easy selection.Poly 330538vertex 273 338Motor of rendering Mentalray 3.5Material Arch and Design planned for

Polygonal model very detailed realized in 3dsmax 9Use of meshsmoth set to 2, the model is separated in groups of easy selection.Poly 330538vertex 273 338Motor of rendering Mentalray 3.5Material Arch and Design planned for being used with global illuminationand final gather.Mak 21 are a certified operator 3dsmax Discreet

The Ducati 916 is a fully-flared sport bike manufactured by Ducati from 1994 to 1998. It sported a 916cc, fuel-injected, 4-valve, liquid-cooled, v-twin engine in trellis frame. The 916 is cited as one of the most beautiful motorcycles ever made.

Fabio Taglioni had been the chief designer of the Ducati motorcycles since the 1970s. He introduced the Pantah in 1979. The engine was upgraded in 1990 in the Supersport series. All the modern Ducati engines are the derivatives of the Pantah.

By the time the 916 was introduced, the 851 and 888 cc engines also had their bore size increased to 96mm resulting in increased displacement of 926 cc and 955cc respectively.

The 916 was a smaller motorcycle than the 888, with a chrome-moly trellis frame. The 916 was completely race-ready. The stylish single-sided swingarm was given to speed up the changing of tyres during races. Although the under-seat exhaust was a feature introduced by Honda in the NR, it stayed as a trademark feature with the 916 line. The under-seat exhaust was given to increase the aerodynamic performance of the motorcycle and gave very clean lines.

If you want to ride it but don’t seem to get your hands on it, why not try it out virtually? FlatPyramid has developed a high-resolution 3-D model of the Ducati 916. We have given it a near to the original look and a well-defined model. We have tried to show all the details and designing. We hope you like it. 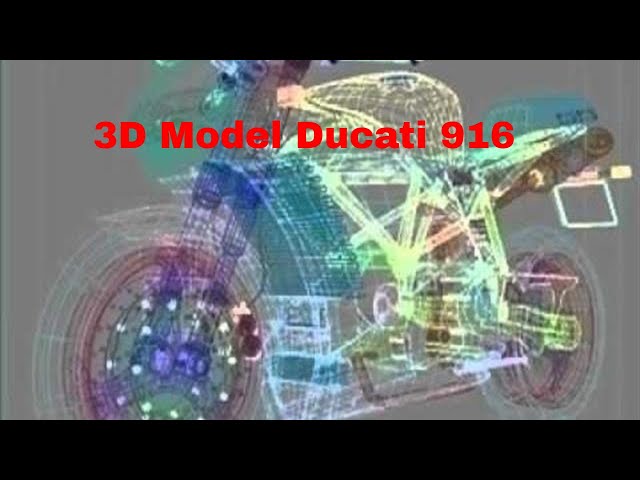