This model was made in 3ds Max 2010, which ensures compatibility from that version onwards.
The geometry is mostly comprised of quads.

-All objects are properly named for their easy identification
-All textures used and necessary for this model are included in each .rar file
-The bodywork bitmaps have a resolution of 5120x5120, and can stand very close-up renders
-The .MAX file includes a Brazil r/s version, with the materials used for the previews above.
-A version with standard materials is also included, in case you prefer not to use Brazil r/s..
-The geometry allows further smoothing if a finer detail level is needed, in most objects.

The motorcycle is modeled to fine levels of detail, please see renders.

In 1901, 20 years old William S. Harley drew up plans for a small engine with a displacement of 116 cc and 4 inch flywheels designed for use in a regular pedal-bicycle frame. Over the next two years, he and his childhood friend Arthur Davidson worked on their motor-bicycle using the north side Milwaukee machine shop at the home of their friend Henry Melk. It was finished in 1903 with the help of Arthur’s brother Walter Davidson.

In 1911, the company introduced an improved V-Twin model with a displacement of 811 cc and mechanically operated intake valves used on earlier V-Twins that opened by engine vacuum. It was smaller than earlier twins but gave better performance. After 1913, the majority of bikes produced by Harley-Davidson were V-Twin models.

By 1913, the yellow brick factory had been demolished and a new five-story structure had been built on the site which took up two blocks along Juneau Avenue and around the corner on the 38th Street.

At FlatPyramid, we have developed a stunning 3D model of the Harley-Davidson 11J 1915. It is available in different formats for various purposes. It can be used for difficult architectural visualizations, animations and gaming. The geometry allows for extra Meshsmoothing in most objects in case this is required. We hope that you like it and appreciate our effort.

In case of further queries, please contact us. We shall be glad to help you out.

Thanks for showing interest in the 3D model of the Harley-Davidson 11J 1915. 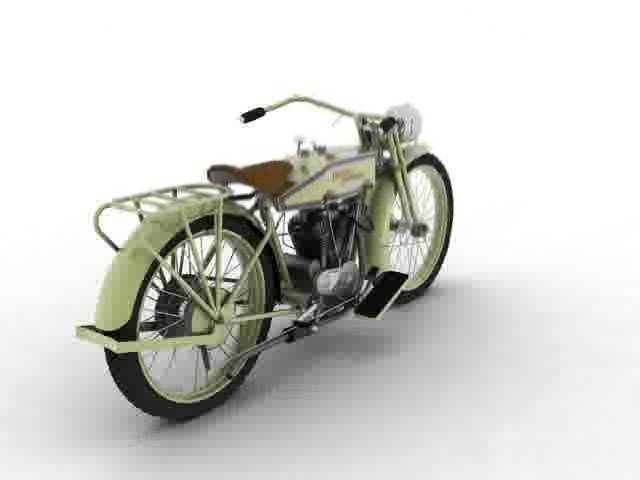