German heavy self-propelled artillery installation of the period of World War II class tank destroyers. Also had the names: "Elephant", 8.8 cm StuK 43 Sfl L / 71 Panzerjäger Tiger (P), Sturmkanone mit 8.8 cm StuK 43, Sd.Kfz.184. This combat vehicle, armed with an 88-mm cannon, is one of the most heavily armed and powerfully armored representatives of German armored vehicles of the period. Despite its small number, this machine is one of the most famous representatives of the class of self-propelled guns, with a large number of legends associated with it.

ACS Ferdinand was developed in 1942–43, being in many respects an improvisation based on the chassis of the heavy Tiger (P) developed by Ferdinand Porsche unaccounted for. The Ferdinand debut was the Battle of Kursk, where the booking of this ACS demonstrated its low vulnerability to the Soviet main anti-tank and tank artillery fire, but the tank destroyer was essentially defenseless against the enemy’s infantry since it did not have a machine gun from the beginning. In the future, these machines were equipped with a machine gun and participated in the battles on the Eastern Front and in Italy, ending their combat path in the suburbs of Berlin

Features:
- Inside scene: -model - 18 textures, 1 bump map
- All materials, bodypaint-textures and textures are included.
- No cleaning up necessary, just drop your models into the scene and start rendering.
- No special plugin needed to open scene.

- NOTE - In lwo, 3ds, fbx and obj the Bumpmap Shirts_R must manually load in the Materialcanal. 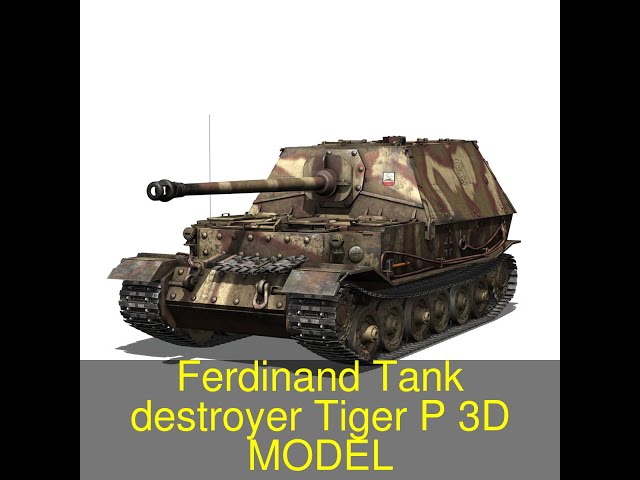