- Fully modeled in 3ds Max 2010. Compatible since that version on.
- All textures included. All bodywork maps are 5120x5120.
- All objects are properly named for their easy identification.
- The .MAX version includes both the Brazil r/s materials used on the previews above and Standard materials, in case you prefer not to use Brazil r/s.
- No other plugins are used.
- All polygonal geometry. See wireframe renders.
- Objects such as the bodywork, swingarm, wheels, etc. Still allow further smoothing in case this is required.
- The model is in scale, in millimeters.

The Harley Davidson V-Rod or VRSC was a line of V-twin muscle bikes, produced by Harley Davidson from 2001 until 2007. It is noteworthy as the first Harley Davidson street motorcycle to feature a modern engine with DOHC and liquid cooling. The VRSC models were absent in Harley Davidson’s 2018 model line announcements.

The V-Rod was the first bike to be introduced with VRSC. The V-rod was developed to contend against the Japanese and American muscle bikes. It used the Revolution engine, developed jointly with Porsche that, for the first time used overhead cams and liquid cooling. Unlike other Harley Production motorcycles, a 60 degree V-twin engine, the radiator and the hydroformed frame members support the round-topped air cleaner cover.

The V-Rod’s engine, called Revolution while based on the VR-1000 Superbike engine the Revolution was mutually developed and engineered with the German sports car manufacturer Porsche. The VRSC marks Harley’s first alliance with Porsche since the Nova project, which, like the V-Rod, was an essential departure from Harley’s first partnership with Porsche since the Nova Project.

At FlatPyramid, we have created a high resolution 3D model of the Harley-Davidson V-Rod Night Rod Special 2013. It is available in different formats for various uses. It can be used for commercial, non-commercial and editorial purposes. This is an ultra realistic 3D model and we hope that you like it.

In case of any query, feel free to contact us.

Thanks for showing interest in the 3D model of the Harley-Davidson V-Rod Night Rod Special 2013. 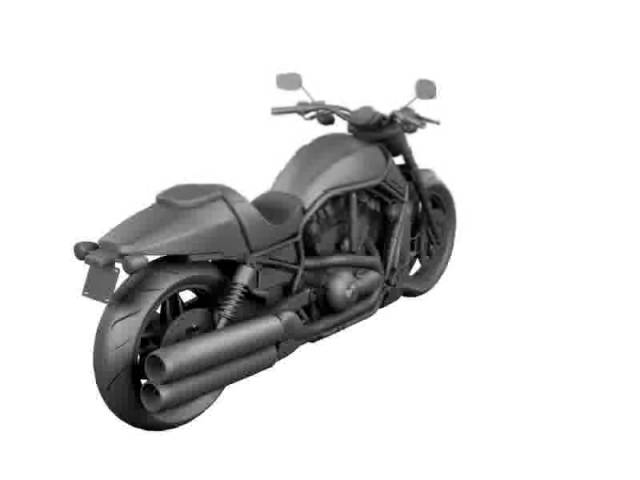