The Intercity Express is commonly known as ICE. It is a high-speed train system that operates primarily in Germany, Austria, Denmark, France, Belgium, Switzerland, and the Netherlands. It is the highest rail service category in Europe and is the German state railway’s flagship train, 259 trains are currently in use.

ICE trains are the Deutsche Bahn’s highest category (Class A) trains. Their fares are not measured as with other trains on a set table per kilometer but have fixed prices for station-to-station connections. Traveling at speeds of up to 320 km / h (200 mph), they are designed to business or long-distance passengers and are marketed as an alternative to flights by the Deutsche Bahn.

In addition to domestic use, the trains can also be seen in neighboring countries. ICE 1 trains, which came into service in 1989, were the first ICE trains.ICE service is likely to resume when Denmark and Germany complete the tunnel under the Fehmarn Belt around 2029.

To redefine its quality and captivating design FlatPyramid came up with a 3D model of ICE train with a detailed interior that is fully textured. This model displays realistic high-definition texture & graphics so it can be used in animations, films, sports, and education. We tried to create the model as real we could. We provide various file formats of the model that you can easily download.

We hope you have found your piece here and we also appreciate your consistent trust in us regarding choosing 3D models. Come again, it is always a pleasure to serve you with our services. 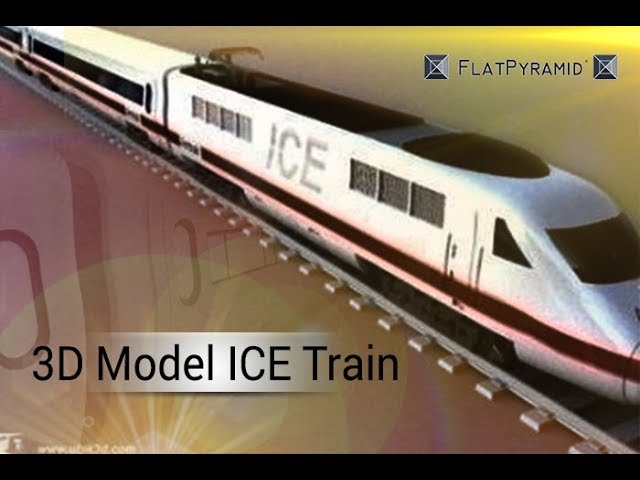