Ancient Roman temples are among the most visible archaeological remains of Roman culture, and are a significant source for Roman architecture. Their construction and maintenance was a major part of ancient Roman religion. The main room (cella) housed the cult image of the deity to whom the temple was dedicated, and often a small altar for incense or libations. Behind the cella was a room or rooms used by temple attendants for storage of equipment and offerings.

This is the inscription that can be read on the frieze of the portico entrance. He attributes the construction of the building to Marco Vipsanio Agrippa, friend, and general of Emperor Augustus. The third consulate of Agrippa indicates the year 27 a. C. In addition, Dio Cassius it fits one in the works by Agrippa in the area of Rome known as the Champ de Mars in 25 a. C. In Hadrian's time, the building was entirely rebuilt, its name does not appear in the inscriptions due to the refusal of this emperor to have his name appear in the works carried out under his mandate. The insertion of a wide round room attached to the portico of a classical temple is an innovation in Roman architecture. The model of circular space covered by a vault had been used by the same time in the great thermal rooms , but it was a novelty to use it in a temple. The effect of a surprise when crossing the threshold of the door should be remarkable. The construction of a hemispherical dome on a circular drum was typical of the time.

Other capitals have been found in Timgad ( Algeria ), Pompeii, Sbeitla ( Tunisia ), and other places in the Empire.

Other types of architecture in the Roman temples can be seen with oriental features such as those of Cibeles, Isis, and Sarapis in addition to those made in coastal cities bordering the Mediterranean Sea dedicated to Mitra, with facilities for the sacrifice of the bull and all kinds of figures related to the bull and the god. Also in Africa, we can see the temple of Juno Celestis ( Tanit ) in Dugga ( Tunisia ). 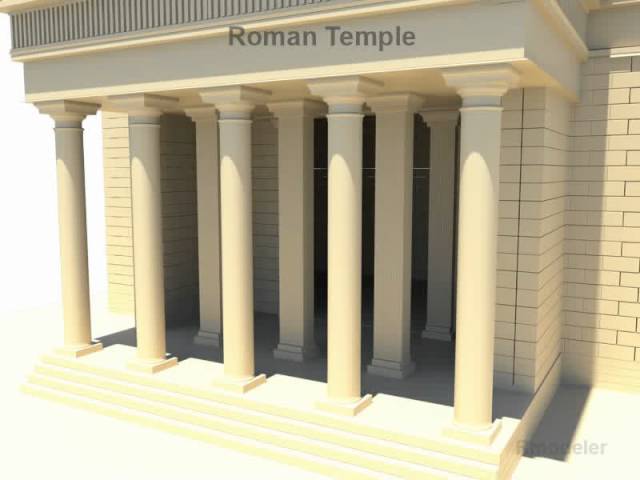