Except HDRI all textures included separately for all formats into each zipped folder.
Other formats may vary slightly depending on your software

Final images rendered with V-Ray Adv1.5RC3.
No Photoshop or compositing used, Product is ready to render out-of-the-box.
V-Ray Light and camera are included in the file.

Model built to real-world scale.
Model is placed to 0,0,0 scene coordinates.
Objects are grouped for easy selection
Every parts of the model named properly.
Texture and material names correspond to model name.
The model is efficiently UV unwrapped.
Non-overlapping UV's are applied where it is necessary.

3ds Max 9.0 V-Ray and Standard material scene are included into individual archive.
All textures, Materials and HDRI map are included.

On February 26, 2012, the HTC a Smartphone company introduced its slate-sized touch screen Smartphone. The Android version it encompasses is 4.0.3, which is upgradable up to 4.2.2 android. HTC One X was the first Smartphone that was having a Quad-core processor in it.

It was launched in the mobile world congress as an HTC’s 6th flagship product. With the latest android version, it was also equipped with HTC sense 4.0 graphical user interfaces. Moreover, the user was also allowed to upgrade into the Sense 5.0 version. Along with the cool features, 25 GB of Dropbox memory was also offered with it.

Its hardware is powered by NVIDIA Tegra 3 system on a chip. The processor is of 1.5 GHz quad-core ARM Cortex-A9 MP Core CPU or a 1.5 GHz dual-core Qualcomm Snapdragon S4 (MSM8960) SoC with an integrated on-die LTE (4G). For the faster response, HTC came up with 1 GB RAM with a long-running capacity by giving 1,800 mAh batteries. Beside its salient features the basic features like a dual-band 802.11n WiFi radio, Bluetooth 4.0 with aptX, GPS, and NFC are always there when you buy an HTC Smartphone.

To match HTC’s astonishing tablet design, FlatPyramid has developed a high-resolution 3D model of HTC One X+ Black and White. High resolution but polygon saving design was made to be used in difficult architectural visualizations, animations, movies, etc. The design is created with such precision and detail that you can enjoy a near to original experience. You can see the admirable details. The model is available in different formats and ready to use. Moreover, this piece is available in both black and white colors.

Thanks for purchasing the 3D model of HTC One X+ Black and White from FlatPyramid.
Visit again, because we love to serve you. 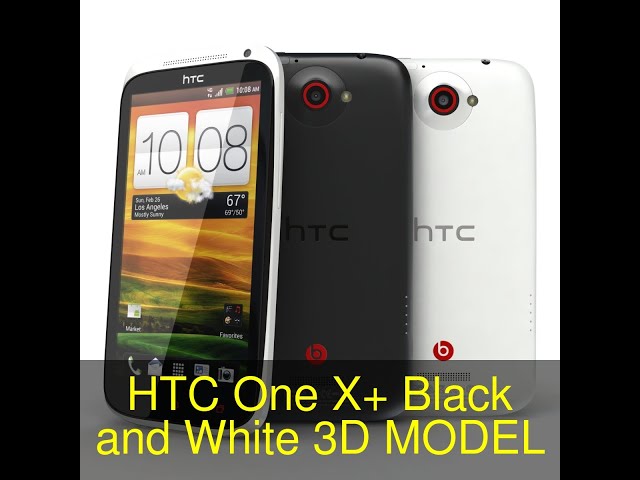