Features:
- Inside scene: -model without textures
- No cleaning up necessary, just drop your models into the scene and start rendering.
- No special plugin needed to open scene.

The Churchill Infantry Tank was a British heavy infantry tank used in the Second World War. It was designed and manufactured by Vauxhall Motors. It was best known for its heavy armour, large longitudinal chassis with all-around tracks with multiple bogies. It was able to climb steep slopes and was used as a base for many specialist vehicles. It was one of the heaviest tanks of the war.

The British and other Commonwealth forces used the Churchill during the North African, Italian and North-West Europe campaigns. In addition, 344 Churchills were exported to the Soviet Union during the Second World War and more than 250 were active on the Eastern front.

The Churchills were named after Prime Minister Winston Churchill who had promoted the development of the tank in the First World War. Churchill once said to the Field Marshall Jan Smuts:

That is the tank they named after me when they found out that it was no damn good!

The hull was made up of simple flat plates, which were bolted together in the earlier models and were welded in later models. The hull was split into four compartments: The driver’s poistion, the fighting compartment, the engine compartment and the gearbox compartment.

To enhance its beauty and to maintain its legacy, FlatPyramid has developed a 3-D model of the Churchill Infantry Tank MK III. Our model looks more like Churchill than Churchill itself. We have developed the design with so much detailing and precision. We hope you like it.

Thanks for showing interest in 3-D model of Churchill Infantry Tank MK-III. 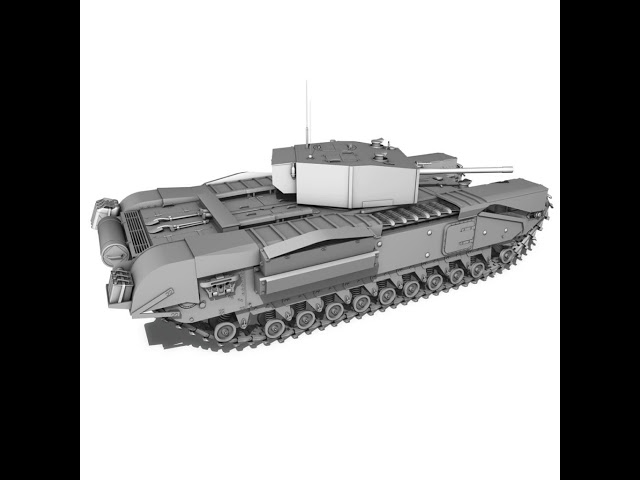