Tiger II is the common name of a German heavy tank of the Second World War. The official
German Designation was Panzerkampfwagen Tiger Ausf.B. often shortened to Tiger B, with the ordnance inventory Designation SD.KFZ 182. It is also known under the informal name Königstiger, by the Americans as King Tiger, and by the British as Royal Tiger.

The Tiger II was a German destroyer tank, which was produced in world war II. It was named in the name of the Indian Bengal tiger, often translated as Royal tiger or king tiger. This tank was the successor of tiger I. It was having some crucial updates including combined latter’s thick armour with the armor
sloping, which was earlier used in the Panther medium tanks. The weight of the tank was 70 tonnes. IT was protected by 100 to 185 of armour in the front and long-barreled 8.8cm KwK 43 L /71 anti-tank cannon. The basic structure was based on the jagtiders turretless anti-tank vehicle.

The development of Tiger II was initiated in 1937, the initial design was made by Henschel, whereas the other design contract was made with Porsche in 1939.

The Tiger II was carrying V-12 Maybach HL 230 P30, which was capable of producing 690 horsepower with 515 kW. The suspension was of the torsion bar, whereas the power was distributed 9.8 PS
(7.2kW)/Tonne.

Our team has taken a chance to bring you the historical design of these tanks at your home. Hence, to redefine this design we came up with a 3D model of highly detailed SD.KFZ 182 Panzer VI
– Ausf B – Tiger II. with a detailed interior that is fully textured.

Our wide variety of formats and high-quality rendering enhances the model’s versatility and functioning for your designing purposes.

Thanks for buying the 3D model of SD.KFZ 182 Panzer VI – Ausf B – Tiger II from FlatPyramid. Visit again,
because we love to serve you. 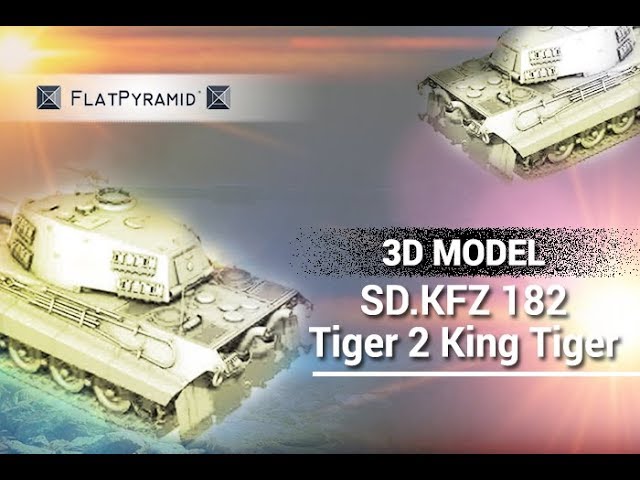