Features:
- Inside scene: -model - 29 objects - 23 textures - 2 bumpmaps
- All materials, bodypaint-textures and textures are included.
- No cleaning up necessary, just drop your models into the scene and start rendering.
- No special plugin needed to open scene.

The M4A1 is a gas operated, selective-fire carbine that is chambered to fire the 5.56×45 mm NATO round. It loads from 30-round STANAG magazines and can attain a fire rate of up to 667 rounds per minute, and has a muzzle velocity of 850 m/s. The M4A1 features a suppressed sub-variant, and can also be fitted with either a red dot sight or ACOG riflescope. In terms of accuracy, the M4A1 has almost twice the dispersion of the M16A4 at distances of beyond 300 meters. Thanks to the SOPMOD program, the M4A1 can be modified with a variety of special accessories, including optics such as the M68 Aimpoint and ACOG, an easily detachable suppressor, an M203 under barrel grenade launcher, and many others.

The M4/M4A Carbine is the latest weapon in a family of firearms dating back to the M16 and even to the carbine AR-15. It is a shorter and lighter version of the M16 assault rifle, and 80% of the parts are parallel. The M4 is 1.3 pounds lighter and 6.58 inches shorter extended and 10 inches shorter with the stock collapsed. This comparable ability to exchange parts also reduced the need for training and maintenance. In all other aspects the M4A1 isn’t that much different to the M16A4 nor its older predecessor, the M16A2. The M4 Carbine has seen active combat actions in Afghanistan since 2001 and has also been deployed by US forces in Iraq following the invasion of 2003.

At FlatPyramid, we have created a model of Colt M4A1 – SOPMOD – Aimpoint Desert Camo with detailed and realistic view that makes it suitable for any visual broadcast, high-resolution film, gaming or design visualization etc. The model was originally created in cinema4D but also available in 3ds, .obj, .fbx and light wave file formats.

Thank you for showing interest in buying 3D model at FlatPyramid. However, if you have any query please feel free to contact us. 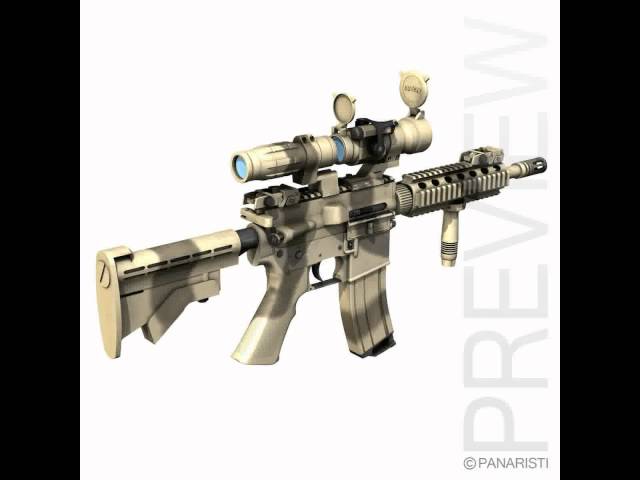