The history of the Audi logo 3D model:

The Saxon Municipal Bank, the lender of all these companies, gave shade to unite the four automakers. He feared for his investments in the automotive industry. On June 29, 1932, Audi, Horch, Wanderer, and DKW plants merged into Auto Union AG. His symbol became familiar to all four rings. After such a merger, the company became the second automaker in Germany. Audi, DKW, Horch, and Wanderer did not compete with each other. The fact is that each brand was allocated a separate market segment: Audi was engaged in sports cars, DKW - motorcycles, Horch - large and richly trimmed cars, and Wanderer - the middle segment of the luxury class. The company also participated in car racing. For several years, the Auto Union models of the Silver Arrow have won many races and championships around the world. At the same time, a large number of world records were set. In 1940, the release of all civilian automobiles of the concern was curtailed, the factories of the association switched to the production of the Horch 901 headquarters vehicle.

In 1909, having left the company bearing his name, August Horch founded the second automobile company in Zwickau, Germany. But since his name was already used, Horch had serious problems. But he could not legally name his new enterprise in honor of himself. But after he translated his surname into Latin, it became legal. “Horch” means “listen,” or “Audi” in Latin. Four interconnected rings appeared in 1932 when four automakers fighting for the survival merged under the corporate flag of Auto Union. These manufacturers were Audi, DKW, Wanderer and, ironically, Horch.

The defeat in the First World War put German industrialists in a difficult position. To stay afloat, four automotive companies decided to merge. In 1934, the fateful merger of Audi, Horch, Dampf-Kraft-Wagen (DKW) and Wanderer took place. The new concern was named Auto Union. And its symbol, quite logically, was four rings, each of which housed the emblem of one of the former independent units.

In 1949, a logo that was difficult to understand due to numerous elements was simplified, leaving only four rings and the inscription “Auto Union”. And even later, in 1969, after the merger with the NSU Motorenwerke, the rings were completely abandoned. The emblem of these years was simply the inscription “Audi NSU”.

They returned to the rings in 1985. This time under their weave was simply the inscription “Audi”. Since that time, the icon has changed several times, until, since 2009, it has acquired modern features, becoming more voluminous and silver. The inscription with the name has moved to the lower left edge.

Audi is famous not only for the highest quality cars but also for the developed structure of representative offices and after-sales services. And high-quality genuine Audi spare parts and analogs for any models of the German brand at affordable prices can be ordered in our online store.
In August 2009, the famous logo, consisting of four rings, underwent a slight restyling. The logo font and traditional metal rings have also changed: the new logo has become more voluminous, chrome and more photographic. 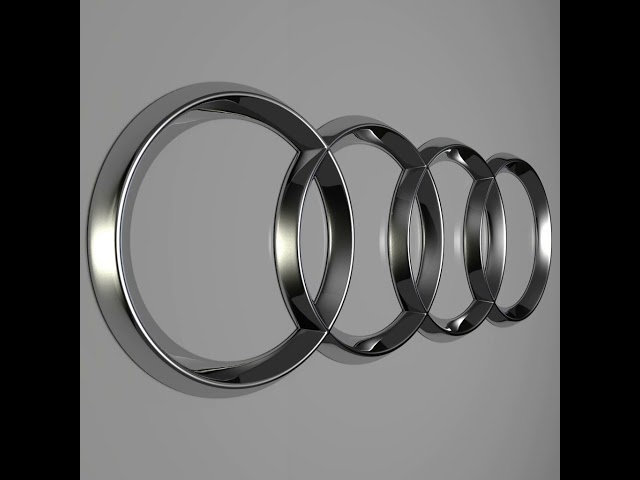