Made entirely in 3ds Max 2010, with polygonal surfaces, mostly quads.

The .MAX file comes with both Standard and Brazil r/s materials, the ones used for the previews above.
Diffuse maps for the speedometer and the bodywork are included. The bodywork comes in all the colors currently offered by Harley-Davidson for the 2012 model, with 2 extra.

The geometry allows for extra MeshSmoothing in case this is required.

A softail is a motorcycle whose rear suspension spring is not directly visible. The Harley Davidson softail frame is meant to seem just like the rigid frame bikes of the past, while still having the comfort of rear suspension. The shock absorbers are positioned along the axis of the motorcycle, tucked under the transmission on models from 1984 to 2017 and under the seat on 2018 models.

There are many Harley-Davidson models with the Softail frame, including the Softail standard, Custom, Springer Softail, Haritage Softail, the Dark Custom Blackline and Breakout.

Bill Davis, a fanatical Harley rider and engineer from St. Louis, Missouri, designed the softail in the mid-1970s. His first design, which he worked on in 1974 and1975, had a cantilever swingarm. This allowed the normal Harley-Davidson oil tank to be placed under the seat.

In April 1980, Harley-Davidson started work on its own rear suspension design that might have the design of a hard-tail motorcycle. The job was given low priority until later in the year it was transferred to Jim Haubert Engineering.

At FlatPyramid, we have developed a stunning 3D model of the Harley-Davidson FXS Softail Blackline 2012. It is available in different formats for various purposes. It can be used for difficult architectural visualizations, animations and gaming. MeshSmooth can be applied in most of the geometry if desired.

In case of further queries, please contact us. We shall be pleased to help you.

Thanks for showing interest in the 3D model of the Harley-Davidson FXS Softail Blackline 2012. 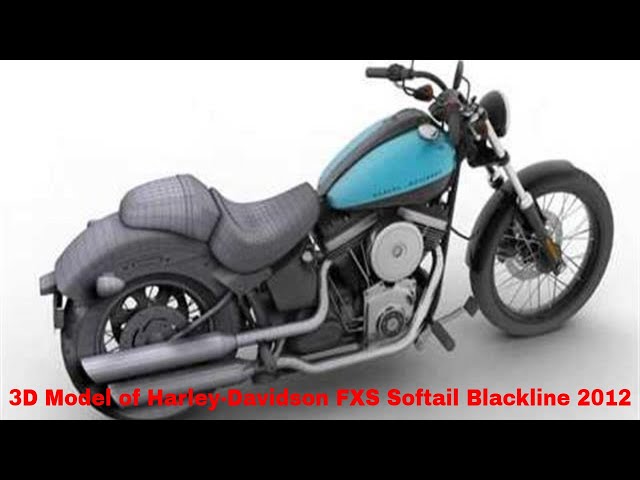