- obj File - lwo file - 3ds file - fbx file Version 2010
The M3 Stuart, formally Light Tank M3 was an American light tank of World War II. It was used by British and Commonwealth forces prior to the entry of the USA into the war, and thereafter by US and Allied forces until the end of the war. In British service it also had the unofficial nickname of Honey.

Stuarts were the first American-crewed tanks in World War II to engage the enemy in tank versus tank combat. They were also the light tank counterpart of the M3 Lee, which was a medium tank.

The US army initially deployed 108 Stuart light tanks to the Philippines in September 1941, equipping the US Army’s 194th and 192nd Tank Battalions. The first U.S tank versus tank combat to occur in World War II, began on 22nd December 1941 when a platoon of five M3s engaged the Imperial Japanese Army 4th regiment tanks.

When the US army joined the North African Campaign in late 1942, Stuart units still formed a large part of its armour strength. After the disastrous Battle of Kasserine Pass, the US quickly followed the British in disbanding most of their light tank battalions and subordinating the Stuarts to medium tank battalions performing the traditional cavalry missions of scouting and screening. For the rest of the war, most U.S tank battalions had three companies of M4 Shermans and one company of M3s.

At FlatPyramid, we have developed a 3D model of the M3 Light Tank Stuart Early Production. It is a very high definition model which can be used for commercial, non-commercial and editorial purposes. It is available in different formats to be used for different purposes. We hope that you like it.

For further assistance, please feel free to contact us. We will be very happy to help you out.

Thank you for showing interest in the 3D model of the M3 Light Tank Stuart Early Production. 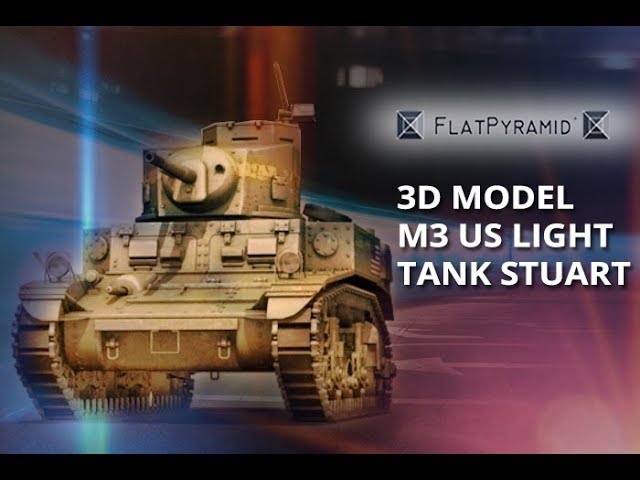