The Panzerkampfwagen IV (Pz.Kpfw. IV), commonly known as the Panzer IV, was a Medium tank developed in Nazi Germany in tue late 1930s and used extensively during the Second World War.
Its ordnance inventory designation was SD.KFZ 161.
Robust and reliable, it saw service in all combat theaters involving Germany, and has the distinction of being the only German tank to remain in continuous production throughout the war, with over 8,800 produced between 1936 and 1945.

It saw service in all combat theaters involving Germany and was the only German tank to remain in production throughout the war. It received various upgrades and design modifications, intended to counter new threats; it extended its service period. Generally, the modifications involved increasing Panzer IV’s armour protections or upgrading its weapons.

The Panzer IV was partially succeeded by the Panther medium tank. It was introduced to counter Soviet’s T34. The Panzer IV continued as a significant component of the German armoured formations to the end of the war.

The Panzer IV was the brainchild of the German General and innovative armoured warfare theorist Heinz Guderian. The chassis had originally been designed with a six-wheeled, interleaved-road wheel suspension. Permitting great vertical deflection of the road wheels, this was intended to improve performance and crew comfort both on and off-road.

The prototype required a crew of five men; the hull contained the engine bay to the ear.

At FlatPyramid, we have developed a 3-D model of the SD.KFZ 161 PzKpfw IV – Panzer 4. They are available in 3ds, fbx, c4d, lwo, obj with accurate model without texture. They are available for commercial, non-commercial and editorial use. In case of any query, please feel free to contact.

Thanks for showing interest in the 3-D model of SD.KFZ 161 PzKpfw IV – Panzer 4. 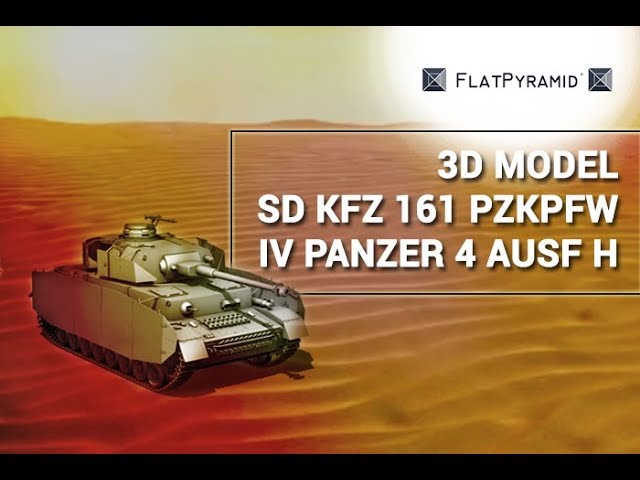