Coca-Cola is a carbonated soft drink sold in stores, restaurants, and vending machines in more than 200 countries. It is produced by The Coca-Cola Company of Atlanta, Georgia, and is often referred to simply as Coke (a registered trademark of The Coca-Cola Company in the United States since March 27, 1944). Originally intended as a patent medicine when it was invented in the late 19th century by John Pemberton, Coca-Cola was bought out by businessman Asa Griggs Candler, whose marketing tactics led Coke to its dominance of the world soft-drink market throughout the 20th century.
Verts - 255358
Edges - 510720
Faces - 255360
Tris - 510720
UVs - 299534

The Coca Cola or coke Company coke is a carbonated soft drink that has earned the distinctive privilege of owning probably the world’s most widely recognized brand. The story of this famous Brand logo begins in Atlanta, Georgia when the founder of Coco- cola John S Pemberton finalizes the formula for his drink in 1886, and his partner (bookkeeper), Frank M Robinson, suggests the name Coca-Cola, believing that “the two Cs would look well in advertising”. Yes it’s true, the world’s most famous brand name was not created by a designer or think tank, but a number cruncher, albeit an exceptionally creative one who had a natural knack for advertising. He then experiments with the writing of company’s name in Spencerian script – a popular writing style back then. At this point no logo existed so they opted for a very simple and unassuming serif font.

Before this, around 130 years ago, Coca Cola was enjoying exponential popularity; not just in Georgia, but throughout the nation. Pemberton, feel that time has come to build a proper logo for the brand. Frank’s excellent penmanship skills would pay off in the form of the scripty logo that we are all familiar with.

In 1893, after receiving recognition from the patent office, the company added a trademark to the tail of the first C in the cursive design. Over the years, the trademark in the tail moves under the logo instead, and in the year 1969, a new logo is introduced with red square background, classic white script, and a white ribbon or wave detail underneath. From 1886 to today, the Coca-Cola logo has seen some larger changes early on and more subtle differences as the company aged.

At FlatPyramid we have made Coco Cola 3D model for use in architectural visualizations and animations maximally close to the original. Thank you for showing interest in buying 3D model from FlatPyramid which are available to download for commercial, non-commercial, and editorial use. 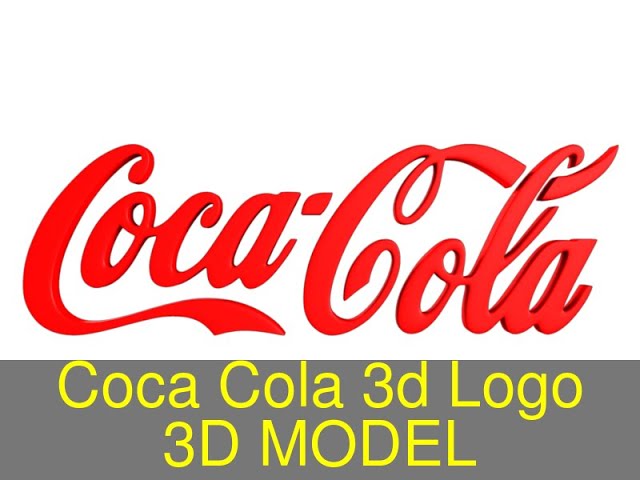