The young and talented Louis Renault was only 21 years old when he created his first car right in the courtyard of his house. Soon, he already began to receive orders for the construction of cars, which then prompted him to open his own automobile production. In 1989, Louis and his brothers organized a car company with the long, intricate name Société Renault Frères in Boulogne-Billancourt.

The first logo used on the company's products consisted of the initials of three Renault brothers: Louis, Ferdinand and Marcel, appeared in 1900. Later, in 1906, it was redone, replacing the initials with the front of the car.

With the outbreak of World War I, Renault pushed cars into the background and focused on the production of light tanks called the Renault FT-17. The tanks were so successful that after the war ended, the brothers redid the logo by drawing a tank there. The shape of the diamond (or, in other opinions, traces of the tank) was formed later, in 1925, and has remained so far without any major changes.

Separately, it is worth noting the color scheme: Renault's color is yellow, a rather rare color for a car brand.

Of all the car brands, the history of the Renault logo is perhaps one of the most interesting. It has more than a century of duration. During this period, the Renault logo has changed more than ten times. These were both cardinal adjustments and minor amendments.
The first Renault logo was created in 1900. The emblem that appeared from scratch was the initials of the founders of the company (brothers Ferdinand, Marcel and Louis Renault), enclosed in an oval, which was decorated with a patterned ribbon on top.

In 1906, the initials of the founding brothers disappeared from the Renault logo, giving way to the image of the car. The car, still very similar to an old carriage, was placed in a double circle, the inside of which, according to fashion trends of the design of that time, resembled a gear.

During the First World War, the factories of the French company Renault, as required by the time, changed their specialization. They launched the production of military equipment. Of course, this could not but affect the company logo. In 1919, the car gave way to a tank.
Despite the continuous updating of emblems, changes in accordance with the situation, world politics, the specifics of production, etc., none of them adorned Renault's equipment. Placement of company logos on car grilles began only in 1922.
The first logo of the Renault brand (Renault), which adorned the company’s car, was created in 1923. It had a round shape and was simply the inscription “Renault”, placed on the grille. This company logo lasted only two years.

The more familiar logo for us in the form of a rhombus was developed by designers in 1925. It was the same inscription “Renault” in the center of the radiator, but already diamond-shaped grille. This emblem flaunted on the hoods of cars for a relatively long time.
After the end of World War II, in 1946, the Renault logo first acquired color. During this period, the European automotive industry was experiencing a rebirth, and the company's management decided to update the logo. The inside of the Renault logo was painted in deep yellow. This color is currently rarely used by automakers for corporate identity and corporate design. This became an additional “trump card” of the French company, making it recognizable.
In 1959, the logo again lost its color, again becoming monochrome. The central inscription changed the font, was enlarged. This logo remained until 1972.
In 1972, the most minimalist version of the Renault logo was presented to the world - an empty rhombus, without text and other graphics, drawn by a triple line with the effect of volume (“tape folding”).

Two decades later, in 1992, specialists from Style Marque developed a new look for the logo of the Renault car brand. The text returned to this version of the logo. But, being already recognizable, the rhombus ceases to be the center of composition. A more simplified geometric figure was located above the inscription "Renault", exactly in the middle.

The following changes occurred in 2004 and 2007. First, the brand name was placed to the right of the rhombus, which was placed on a yellow rectangular background. Then, the logo elements were again interchanged: the inscription was lowered under the rhombus, increasing the yellow background to the entire image. In a sense, it was a return to the 1992 version, but with the addition of color and a more modern lettering, without underlining. The rhombus itself eventually became silver-gray, chrome-plated, voluminous. So it remains to this day. 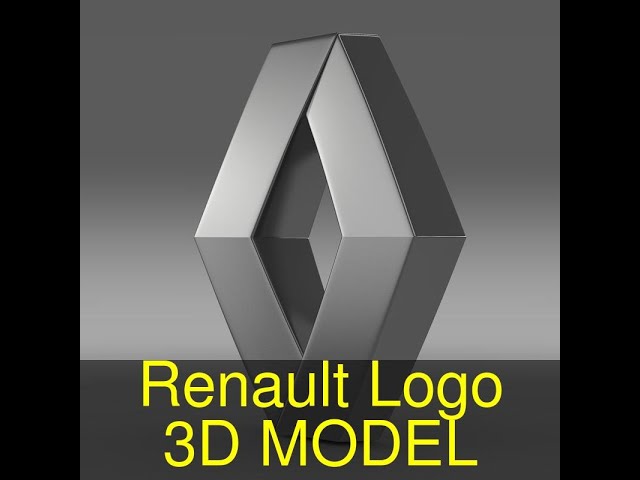