During World War II, the British Army was armed with a large number of various armored vehicles developed on the basis of a heavy infantry tank Mk.IV Churchill. Among other samples were built various machines for engineering troops. One of the most interesting options for such an application of tanks was the project Churchill AVRE. This engineering tank could perform the basic tasks of ensuring the work of the troops, as well as attack certain targets.

The main prerequisite for the creation of the next project of the modernization of the heavy tank in the interests of the engineering troops was the battle for Dieppe. During the course of this battle, the sappers of the advancing troops faced serious problems of various kinds. Among other things, there was a problem with the delivery of demolition charges to various barriers and other objects. Under the dense fire of the enemy, the fighters could not install explosives, because of which the barricades remained in place and prevented the troops from moving forward. Including for this reason, the navy suffered a defeat.

After the retreat, Great Britain and Canada began to study the experience of battle and to draw the necessary conclusions. Thus, the Canadian military decided to develop a new model of armored vehicles, which could protect the fighters from enemy fire, as well as solve various tasks facing the engineering troops. It was proposed to base one of the existing tanks with a high level of protection and equip it with a number of special equipment, as well as new weapons. As the basis for such an engineering vehicle, we chose the Churchill infantry tank of the Mk.III modification.

After upgrading, the Churchill tank was to be transformed into an “Armored vehicle of the royal sappers” - Armored Vehicle Royal Engineers or AVRE. The full name of the engineering tank looked like Churchill AVRE.

The main requirements for the machine used as a base for an engineering tank were a high level of protection and the ability to adapt to the solution of various special tasks. The Churchill Heavy Infantry Tank met these requirements. He was distinguished by relatively thick armor, in the basic versions he carried a sufficiently powerful weapon, and also had acceptable mobility characteristics. Thus, it could be equipped with new special equipment.

Protection of the front of the hull of the tank "Churchill" was assigned to several armor plates with a thickness of 102 mm. The vertical sides had a thickness of 76 mm, and 64-mm armor plates were placed in the stern. In the modification Mk.III a welded tower was introduced, consisting of several parts with a thickness of up to 76 mm. From above, the hull and tower were protected by roofs up to 20 mm thick. With such a reservation, the tanks could withstand the shelling of various artillery systems without the risk of defeat. Given the need for the work of military engineers in the immediate vicinity of the enemy’s positions, armor with a thickness of up to 102 mm was an essential element of the machine.

Serial tanks were equipped with carburetor engines up to 350 hp. With a machine weight of up to 40 tons, such a power plant provided acceptable specific power values. There was the ability to move on the highway at speeds up to 25 km / h and at lower speeds on rough terrain. In this case, the tank could be equipped with additional funds in the form of trawls, mats, fascines, etc. These capabilities were most actively planned to be used in the operation of Churchill AVRE tanks.

In the modification of the Mk.III, the Churchill tank lost its gun in the front hull sheet, instead of which it was proposed to install a rifle caliber machine gun. At the same time, a 57-mm QF 6 pounder Mk III gun and a machine gun paired with it were installed in the turret. Such weapons made it possible to solve the initial "tank" guns, but it was not suitable for using the vehicle as an engineering tank. It was decided to abandon the regular armament of the tank and replace it with a new system.

One of the main requirements for the engineering tank Churchill AVRE same as our Churchill MK IV AVRE 3D model was the delivery of demolition charges to enemy targets. The authors of the project from the Canadian army decided to do without the traditional transportation of charges on the ground and use a new original solution. Now it was suggested to destroy the barriers in the most obvious way - by firing at them. To do this, the base tank had to lose its standard gun and receive instead a special system in the form of mortars with the required parameters.

Features:
- Inside scene: -model - 13 textures - 1 bumpmap
- All materials, bodypaint-textures and textures are included.
- No cleaning up necessary, just drop your models into the scene and start rendering.
- No special plugin needed to open scene.

- NOTE - In lwo, obj, 3ds and fbx the Bumpmap Turret_B must manually load in the Materialcanal. (Strength 35-40) 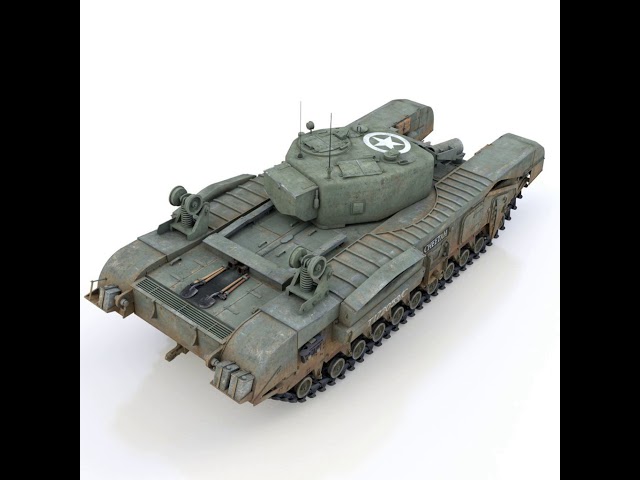